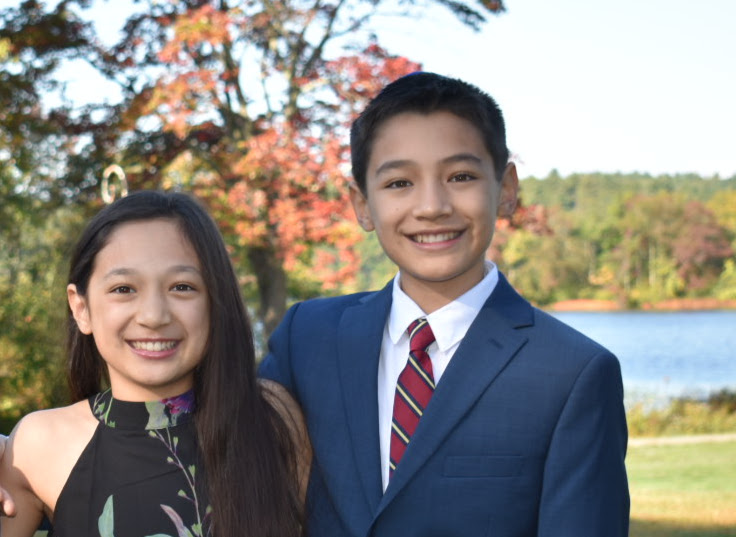 Siblings Audrey and Henry Tushman have been studying with RSC piano faculty member Sandra Hebert since they were about five years old. Together, this faculty-student trio has built a meaningful foundation for music education. Eighth-grader Henry says that he looks forward to every lesson because of Ms. Hebert’s positive and caring demeanor. “She knows all of her students really well,” notes Henry. Sixth-grader Audrey says that Ms. Hebert is great at explaining musical concepts, providing tangible examples to make them clearer. Among Audrey and Henry’s favorite memories with their teacher are summers spent in Cremona, Italy (home of violinists Stradivarius, Amati, and Guaneri) at the Cremona International Music Academy.

Ms. Hebert is as grateful to teach Henry and Audrey as they are to study with her. She says that the siblings always make time to practice and are “a pleasure to teach.” She’s particularly proud of them for making the most of The Rivers School Conservatory’s abundant performance opportunities and gaining confidence in front of an audience. Henry says that these opportunities are his favorite part of being a student at RSC, explaining that “every week, you can perform in a recital or participate in a workshop.” He describes the experience of playing for an audience as “exhilarating.” Henry and Audrey have also performed at Young Artist Concerts and premiered compositions at the Seminar on Contemporary Music for the Young. Through these experiences, they have grown into the expressive artists they are today. In Audrey’s words, “I used to think what mattered most was how many notes you got right. I later realized that it’s not the notes, but it’s what you make of them. You have to make it music.”

During their years of study, music has become an important part of Audrey and Henry’s lives. “In the last couple of months, it’s something that I’ve done every single day,” says Henry. “It’s like a rock that I’m always holding on to.” The Tushman siblings’ appreciation of music is evident to all who have the privilege of hearing them play. In fact, they have earned countless awards for their efforts. Henry has recently been named a gold medalist in the Seattle Bach Competition, a first place winner in the American Fine Arts Festival “Golden Era of Romantic Music” competition, and Alternate in the MTNA Junior Performance Competition for Massachusetts. Both Audrey and Henry were named first place winners in the American Protégé International Music Talent Competition this past fall, and they won first and second place, respectively, in the American Fine Arts Festival Online Stay at Home International Competition. For the two latter honors, winners’ recitals will take place at Carnegie Hall in 2021-2022.

Henry and Audrey are eagerly anticipating their visits to New York City next school year and have already begun planning an itinerary: Audrey has a list of museums to visit, including the Museum of Ice Cream, and looks forward to seeing the holidays lights and Rockefeller Center tree, as one of the recitals is scheduled to take place in December. Henry is excited to play in such a large venue and sample the city’s cuisine. Both look forward to sharing the experience with loved ones, noting that their grandparents and cousins will be in attendance.

For these talented young pianists, part of what makes music so special is being able to enjoy it with family. They initially started taking lessons because their mother played piano growing up. Audrey says that through shared practice time, her mother passed on the gift of music to her children. Audrey says, “Hopefully we might pass it on to our own kids one day.” Ms. Hebert adds, “As their teacher, I feel grateful to their mom and dad because they’ve been really supportive. I feel like we’re all on the same team.” The Rivers School Conservatory looks forward to witnessing and celebrating the continued successes of this winning team.