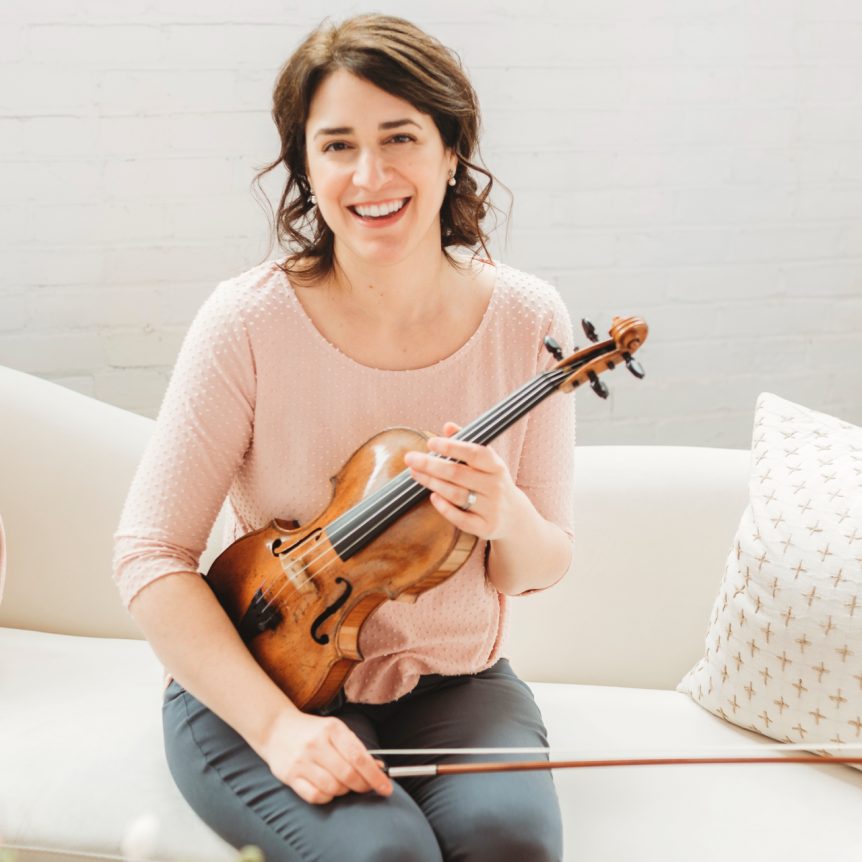 For Lauren Cless, music is a family affair. Her husband, a professional musician and music teacher, plays violin and viola, and they own a business playing music for weddings. Her daughter is 6 and plays violin in the Suzuki program at RSC. And while her son is only 3, Lauren hopes he will become a cellist so the family can have a string quartet.

Lauren credits her passion for music to Sesame Street. She explains, “When I was 3, I saw Itzhak Perlman playing the violin on the show and told my mom that I wanted to play violin too.” At first, her mother thought it was a passing interest based on the show. However, Lauren kept asking to play violin and, two years later, started to play at age 5.

She began playing in a youth orchestra at age 7, but says it was a summer chamber music camp in Vermont called Point Counterpoint that “really sold” her on playing the violin. By the time she was 15, she knew she wanted to play violin as her career.

Lauren recalls telling a science teacher in high school about her career plan to be a violinist. “My teacher looked at me and said, ‘You have no idea what you will be.’ But she was wrong. I knew where my heart was, and I knew I was a musician. That was it!”

After earning a Bachelor of Music from Northwestern University and a Master of Music in Violin Performance and Suzuki Pedagogy from the Cleveland Institute of Music, Lauren played full-time for the Charleston Symphony Orchestra in South Carolina.

She then moved to Washington, D.C. to teach at the Levine School of Music. However, she met her now-husband that same week and later joined him in Chicago. Lauren says she was happy to move back to her old stomping ground. “I went to college in Chicago and had played in the Civic Orchestra, the Chicago Symphony’s professional training orchestra, which was a great experience,” she says.

In Chicago, Lauren split her time between teaching at the Western Springs School of Talent Education and freelance performing. She received the Certificate of Achievement from the Suzuki Association of the Americas, an award that recognizes teachers for their commitment to excellence, life-long learning, and self-improvement.

Two years ago, Lauren moved to Massachusetts to be closer to her and her husband’s families. Based in Acton, she was looking for a “robust” Suzuki program at a music school with a breadth of offerings from lessons and chamber music to youth orchestras. She also wanted a “musical home” for her own family.

Lauren found what she was looking for at the Rivers School Conservatory. She says, “This is a great fit! What I find particularly special at RSC is the sharing time in our Suzuki program on Sunday afternoons. We have two classes that meet before sharing time and two classes that meet after. During the 30 minutes in between those classes, we all come together for an informal recital. This is an opportunity for students to share what they are actively working on with each other. It’s an amazing way to encourage students to always be ready for a performance and help them get over any fear they have of performing. When you perform every week, it’s a part of your life and it’s not so scary. This kind of weekly performance opportunity is unique to RSC and highlights how supportive this community is.”

As for her teaching philosophy, Lauren believes that every child can learn to play an instrument if given the right environment. “My teaching is grounded and specific to the child in front of me. I like to start teaching at age 4 and have had students go all the way through high school with me.”

She adds, “At RSC, I teach younger students in the Suzuki Program, but I also am coaching a piano trio in the Chamber Music Program. It’s exciting to be able to participate in both programs!”