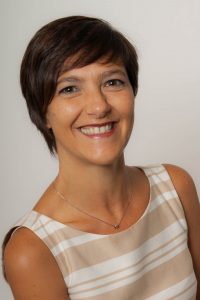 Ms. Sanna will succeed David Tierney as he leaves Rivers to become Head of School at Cambridge Friends School. An award-wining pianist, Ms. Sanna brings a deep commitment to music performance and music education as well as nearly two decades in arts administration. She has a proven track record of successful fundraising, program development, and recruiting at several of Boston’s leading community music institutions. She is also an active performer in solo piano recitals, chamber music and collaborative piano with vocal and instrumental groups in the Boston area and throughout Italy.

Most recently, Ms. Sanna was Executive Director at Project STEP (String Training Education Program), founded in 1982 to provide rigorous string training for children from underrepresented communities in the Greater Boston Area, as well as performance opportunities and family support. Prior to that, she served from 2010 through 2016 as Executive Director at the Dedham School of Music, where she exponentially increased enrollment and developed an array of programs, including early childhood classes, private lessons, ensembles, outreach programs in the local public schools, partnership programs with private schools, and concerts for the public.

Ms. Sanna’s appointment comes after an exhaustive search conducted by the Arts Consulting Group and a hiring committee led by Head of School Ned Parsons and made up of Rivers trustees, Rivers faculty and parents, and RSC faculty and parents. The hiring process began mid-winter and drew applicants from around the country. The qualifications of the candidates were carefully reviewed by the hiring committee, and the final candidates were invited to Rivers to meet with the Rivers School administration and arts faculty; RSC’s department heads, faculty, and administrative team; as well as students.

“The hiring committee saw quickly that Gabriella’s impressive musical background, combined with leadership in the world of both community music schools and independent schools, made her a perfect fit both to lead The Rivers School Conservatory and to chair the Performing Arts Department at The Rivers School,” said Ned Parsons. “Importantly, we also saw that her commitment to inclusion in music education and to expanding opportunities for students of all ages and backgrounds to engage and discover a passion for the arts made her a perfect fit for our community. We’re thrilled to have Gabriella joining The Rivers School as she steps in to lead our programming forward.”

During his 26 year tenure at The Rivers School and The Rivers School Conservatory, David Tierney built a faculty renowned for both their professional accomplishments and their teaching ability, and fine-tuned the program offerings to fully engage both Rivers students as well as students from the surrounding communities. A highlight of his tenure was the establishment of the Conservatory Program for Rivers’ outstanding student musicians. In addition he directed numerous Rivers musicals and was the conductor of The Rivers Symphony Orchestra, a community orchestra sponsored by the Conservatory.

Under Mr. Tierney’s direction, the reputation of the music programs has continued to grow, with students and ensembles garnering awards in every musical genre and at every level of performance. He instituted a standard of excellence for which the Conservatory is now known, a student-centered approach that put the needs of children first in order to foster in them a love for music, and an inclusiveness that encouraged beginner and expert alike and encouraged deeper exploration on the part of those he served.