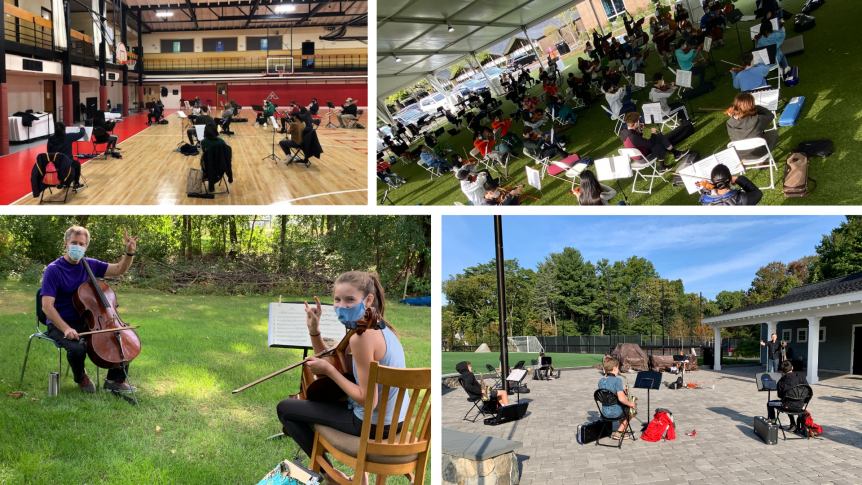 The pandemic did not stop RSC from providing students with abundant educational opportunities in 2020-2021. In fact, the calendar was as packed as ever, with concerts, competitions, master classes, rehearsals, recitals, and more. Here are some highlights!

The Rivers Youth Orchestra program was a trailblazer in the return to in-person ensemble playing. It successfully and safely offered rehearsals on campus throughout the year, while also employing technology to include students who preferred to remain remote. RYO ended the year victoriously with a day of impressive outdoor performances by all five orchestra levels. Here is the Rivers Youth Symphony’s performance of John Philip Sousa’s The Stars and Stripes Forever.

This year’s Seminar would have been the 43rd, had it not been canceled in 2020 due to COVID-19. Thus, the return of this tradition in April 2021 was especially welcome. The 42nd Annual Seminar on Contemporary Music for the Young included the world premiere of the commissioned work Abandon Fear, Part 1 by Keeril Makan, as well as 34 other premiered works. The format was different than in the past, with students and faculty presenting a combination of virtual and live performances. However, the event’s mission remained the same: to address the need of young performers to hear, play, and learn the music of their time.

Camerata Strings shared their music with the community in the form of nine performance ‘postcards.’ Their musical greetings were distributed in RSC’s weekly newsletter and were also shared with residents of North Hill Retirement Community in Needham, through their in-house television channel. Every piece exemplifies musical excellence, and the players’ enthusiasm consistently shines through. Hear their most recent ‘postcard’ below, or access all nine here!

In December, Rivers School and RSC jazz ensembles presented the 2020 Rivers Jazz Festival, featuring the music of Bob Pilkington (professor of Jazz Composition at Berklee College of Music and commissioned composer for the festival). Then, RSC jazz combos played a livestreamed concert in May. This concert showed off the repertoire and skills students learned through regular rehearsals with RSC faculty members Dan Loschen, Bill Jones, and Clayton DeWalt. Check out one performance from this event below – “Nardis” by Miles Davis!

The RSC ChamberMusicLab launched in January, and in just a matter of months, students have played nine master classes for such artists as renowned conductors Benjamin Zander and Beatrice Affron, and RSC faculty members Gabriela Diaz, Ronald Lowry, Eugene Kim, Danny Kim, and Bruce Coppock. The program wrapped up the year with a series of spring recitals in May through June. Listen to this performance of the first movement of Haydn’s String Quartet in G Major, Op. 77 to hear one of the program’s exceptionally gifted ensembles in action.

The Rivers School Conservatory hosted the first Richter String Competition in May, and nine auditionees were recognized with scholarships. The guest judges noted that all auditionees were well-prepared and presented impressive performances, reflecting highly on the quality of students at RSC! The competition is sponsored by the Magdalena Richter Fund and was created to honor the legacy of extraordinary teaching and leadership by Magdalena Richter, who chaired the string department and taught violin at RSC for many years.

The A. Ramón Rivera Piano Competition, founded in 1990 to honor Mr. Rivera as an extraordinary and inspirational teacher, took place in a virtual format this year! The finals concert streamed in April, and eight finalists were narrowed down to four winners. As always, the competition reflected Mr. Rivera’s uncompromisingly high standards for artistry in music and beauty of sound. In case you missed it, the event is still available to view on YouTube.

In December, high-level marimba students spread holiday cheer through a Winter Marimba Ensemble Concert. They have also shared their artistry in Friday evening recitals, never failing to wow audiences with their talents and creativity. This week, they presented an end-of-year Marimba Celebration with solo and ensemble performances. Enjoy the recording on Facebook!

In February, the Rivers Youth Wind Ensemble began rehearsing weekly in The Rivers School’s Haffenreffer Gymnasium as the only in-person regional wind ensemble program in the Greater Boston area! They concluded the school year with a successful recording session last month. Here is one of the pieces they worked on: Ralph Vaughn Williams’ “Folk Song Suite,” Mvt III.

None of these accomplishments would have been possible without the dedication and perseverance of faculty, staff, families, and students. RSC is a thriving and dynamic place to learn because of you. Congratulations, and thank you to the entire RSC community!

Although the school year is over, RSC will stay busy with seven summer programs in the months ahead. If you haven’t yet registered, don’t forget to do so now! Visit our website to learn more.